Meeting with HE Ms. Susan Grace, Ambassador of Australia

Home Meeting with HE Ms. Susan Grace, Ambassador of Australia 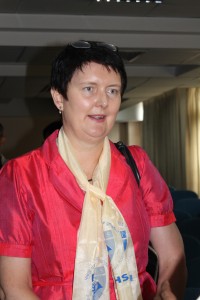 Meeting with HE Ms. Susan Grace, Ambassador of Australia

Nepalese side was represented by:

Australian Side was represented by:

During the meeting, Dr. Adhikari briefly highlighted IFA’s program activities being carried out during the current fiscal year in areas of training, workshop and seminar and talk program. He also dwelt on the long term vision of institutionalization of the Institute of Foreign Affairs including enhancement of the scope of the institution covering security and strategic matters and thereby changing the name of the institution as Nepal Institute of Foreign Relations and Strategic Studies ( NIFReSS).

HE Ms. Susan Grace stressed the need to develop institutional linkages with the counterpart institutions in Australia. She assured to facilitate to develop cooperative relations between the similar think tank institutions in coming days. Mr. Peter Rodgers said that the APCD is organizing a special four-week long training program for Nepal, Bangladesh and Bhutan inviting 5 midlevel officers from each country’s Foreign Ministry. The program covers all important areas of international diplomacy and other necessary disciplines to make the trainees more informative and skilled to conduct the diplomacy on returning back to their respective countries. The program is scheduled to be held in June 2013 in Australia and funding will be managed under Aus Aid.

Dr. Adhikari suggested laying more emphasis on contemporary transnational diplomacy, role of United Nations, protocol, communiqué, as well as negotiating skills and correspondences skills to make trainees become more effective to discharge their duties when assigned to their ministries or missions abroad. He also appreciated the training of MOFA officials and hoped the trainees after return would be trainer in IFA organized similar training programmes in future.

Mr. Shrestha suggested the training program should cover more on areas of effective communications as well as international instruments such as Vienna Conventions, Breton Wood institutions and economic diplomacy.

With regard to the effective management of training institutions, Ms. Andrea suggested for the exchange of visits of the high officials of the similar institutes between the two countries. She is hopeful for managing a visit program to Australia by IFA’s senior officials at the Australian think tank institutions.